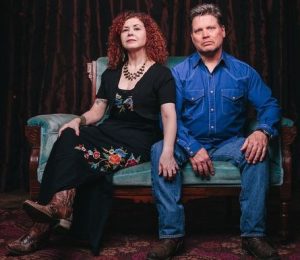 Maria Francis and Jeff Overbo define modern Americana with Silver Lake 66. With a winning amalgamation of classic country, folk and blues, their songs have been hailed by numerous publications and radio stations. Given their knack for authentic, heartstring-tugging songwriting, impeccable harmonies and ardent guitar-playing, it’s no wonder that the duo has been consistently on the rise. Together, they perform outstanding roots-laden duets following in the footsteps of Americana greats from Lucinda Williams to Shovels and Rope.

The couple first began playing music together in the Midwest. First and foremost, Francis and Overbo met in Minneapolis and lingered there for a while. Following several years of recording and performing locally, the duo decided that it was time for a change and they hit the road for SoCal with their Ford van, their guitars and their trusty dog, Bernie.

The Huffington Post’s Randy Radic describes Silver Lake 66’s music as “elegant simplicity” and “the real McCoy.” For Folk’s Sake’s Jonathan Frahm calls the duo “the real deal” and highlights their “sweet harmonies that mesh the entirety of their sound together.”

Tickets are available through Brown Paper Tickets, by calling Bill at (360) 901-0962, or by emailing events@peninsulaartscenter.org.

Wine, beer, and other refreshments are available for purchase.